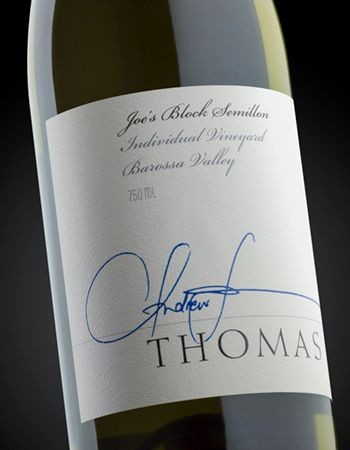 Specialising in Semillon and shiraz, Thomas Wines produce world-class, uniquely regional wine styles. This is the first time we have produced a Semillon from the Barossa Valley. In fact, the first time we have produced a single vineyard Semillon from outside the Hunter Valley. The idea came about as a result of two of our three single-vineyard Hunter Semillons not being picked in the 2020 vintage due to the effects of smoke taint on those particular vineyards.

Joe’s Block, owned and operated by Jim and Cheree Boehm, is situated on the deep alluvial loam soils of the Barossa’s Light Pass district. The 1.7Ha block was planted in 1983. Like many Australian wine regions, the Barossa was also in the grips of quite a severe drought, receiving only 40% of its average long term rainfall ahead of the 2020 growing season. The lower yields were offset by a coolish end to the ripening period, leading to a slightly later picking date of 19th February.

The hand-picked fruit was sent to my good mates at Kaesler wines for whole bunch pressing, and then the chilled juice was transported to the Hunter for fermentation. As a salute to the traditional Barossa style, half of the wine was fermented in used French oak Hogsheads (300L), the other half in tank providing an excellent stylistic contrast to our classic Hunter Semillons.

Light to medium straw in colour. There's a citrus core to the aromas, but with underlying melon and perfumed blossom characters providing a riper feel to the nose. Also a faint grilled nuts and brioche complexity from the subtle oak maturation. Bright and fresh, the palate has attractive lemon curd and stone fruit characters, a gentle acidity and a slightly chalky texture which are all wrapped up within a light to medium-bodied frame.
A delicious Barossa Semillon providing an excellent stylistic contrast to our classic Hunter style

Tweet
A 10% discount will apply at check out on any orders of 12 bottles or more (mixed cases OK). Member discounts will automatically apply
In Stock
<>